I thought the Atreides on Caladan should look “water rich”. I wanted to design a visual language that looked like it was born out of generations of ruling a tropical paradise.

Dr. Yueh – The diamond mark of his conditioning becomes a mask, but it’s not %100 effective so it doesn’t cover one eye.

Thufir Hawat – The Juice of Sapho is held in a small vial near his mouth, always near him. He may once have fit his ceremonial armor better, but he’s no less dangerous.

Gurney Halleck – Patrick Stewart was perfect in this role, but in the book he’s described as being a pretty ugly guy. He has blades all over him, and his clothing is tied down tightly for sparring.

Paul – He wears the Atreides Hawke at his breast, with one “red wing” cape over his shoulder. He is dressed for life on his water-rich homeland.

Reverend Mother Helen Gaius Mohiam – She carries branching staff to represent diverging bloodlines. Her collar echoes the Emperor’s own crest. I wanted to design a motif for the Bene Gesserit with several meanings. Her hair is tonsured like a monk’s, but they wear a braided mohawk like a horses mane to make reference to their ongoing breeding program. They also wear fine chains connected to piercings from their eyes, ears and mouths. This is a visual representation of their constant focus on observation, listening and influence through speech.

Duke Leto – He is described as having a face like a bird of prey, so I exaggerated that. He wears the Atreides Hawke on his chest, with two red wing capes behind him.

The Lady Jessica – She has the Bene Gesserit hair (tonsured with a horses mane mowhawk) and piercings (connecting eyes, hears and mouth). She has a modified version of the Atreides Hawk crest, forming a more elegant cape. 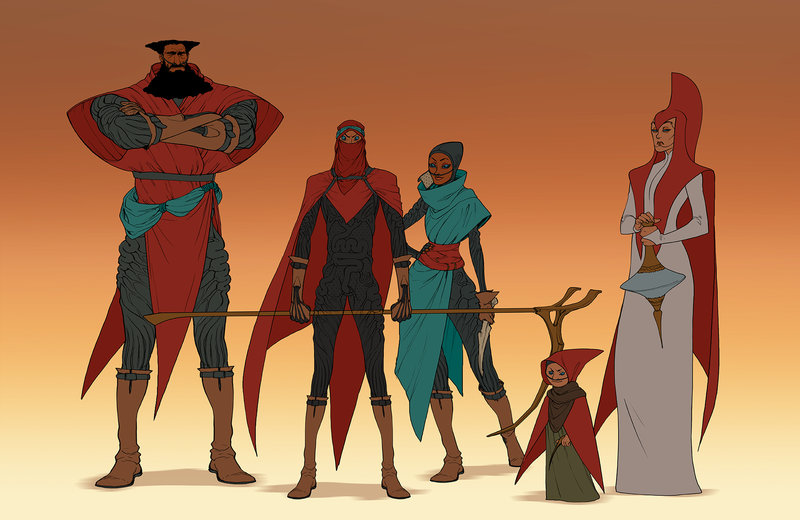